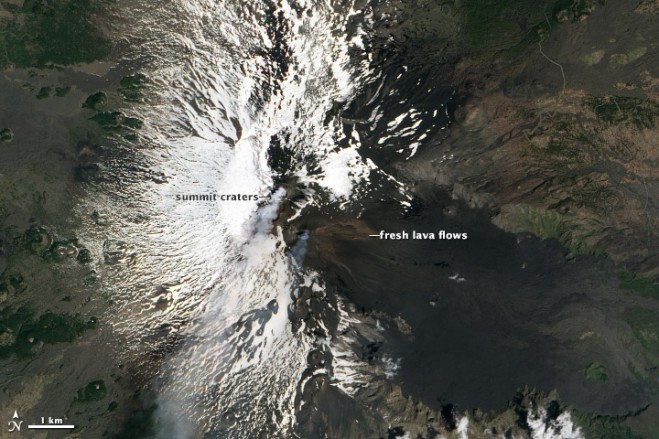 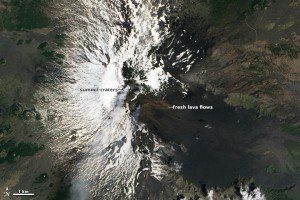 Early in April 2013, Mount Etna in Sicily appeared whimsical, blowing smoke rings composed not of actual smoke, but of steam, volcanic gases and some volcanic ash. Then on April 18, the Advanced Land Imager (ALI) on the Earth Observing-1 (EO-1) satellite observed additional activity.

Ash emissions and Strombolian eruptions started on the evening of April 16 and continued through the following day, according to the Etan Observatory. On the morning of April 18, when the ALI image was acquired, the intensity and frequency of eruptions had increased, and the volcano was in the middle of its 11th paroxysm of 2013.

On April 20, yet another paroxysm began at New Southeast Crater. It was the 12th of 2013 and the 37th since the start of the current series of eruptive activity. By April 20, lava fountains reached 800 to 1,000 meters (2,600 to 3,300 feet) into the sky, and a column of gas and volcanic ash blew eastward away from the volcano.