January 23, 2018
Ship Tracks Across the Atlantic 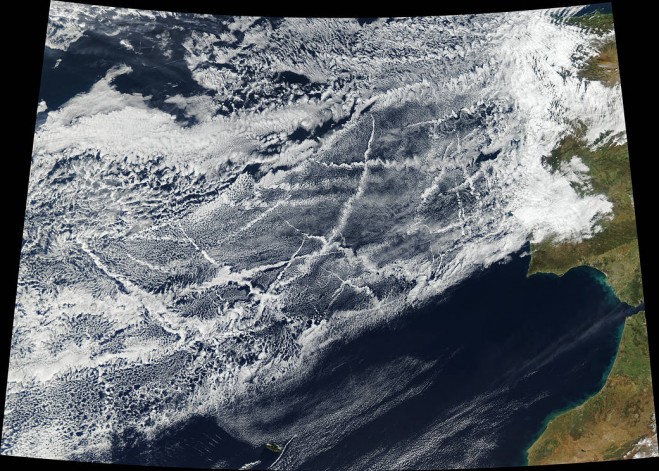 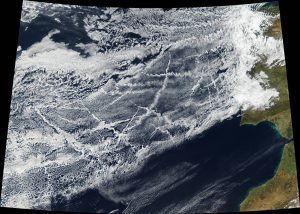 Ships churning through the Atlantic Ocean produced this patchwork of bright, criss-crossing cloud trails off the coast of Portugal and Spain. The narrow clouds, known as ship tracks, form when water vapor condenses around tiny particles of pollution that ships emit as exhaust or that form from gases in the exhaust. Ship tracks typically form in areas where low-lying stratus and cumulus clouds are present.

Some of the pollution particles generated by ships (especially sulfates) are soluble in water and serve as the seeds around which cloud droplets form. Clouds infused with ship exhaust have more and smaller droplets than unpolluted clouds. As a result, the light hitting the polluted clouds scatters in many directions, making them appear brighter and thicker than unpolluted marine clouds, which are typically seeded by larger, naturally occurring particles such as sea salt.

The Moderate Resolution Imaging Spectroradiometer (MODIS) aboard the Aqua satellite captured this natural-color image on Jan. 16, 2018. Some of the criss-crossing clouds stretch hundreds of kilometers from end to end. The narrow ends of the clouds are youngest, while the broader, wavier ends are older.