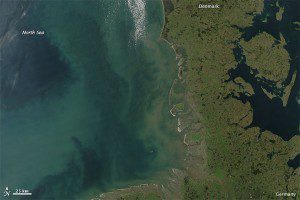 The varied shades in this image of the North Sea are likely due to a combination of factors. Near coastal estuaries, sediments probably lend significant color to the water, according to Norman Kuring of the Ocean Color Team at NASA's Goddard Space Flight Center. The North Sea is relatively shallow and can be subject to heavy seas and strong tidal currents, so re-suspension of bottom sediments is probably not uncommon, especially after storms.

Farther out to sea, the blue-green shades may result from a mixture of re-suspended sediment and phytoplankton”microscopic marine plants that thrive along coastlines and continental shelves.