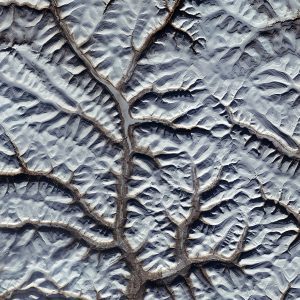 Virtually untouched by human influence, this isolated mountain range includes pristine forests and cold-water lake and river systems. The lakes are characterised by elongated, fjord-like shapes, such as Lake Ayan in the upper-central part of the image. Zooming in on the lake shows that it is mostly ice-covered, with small patches of water peeking through around its lower reaches.

Another feature of this area is the flat-topped mountains formed by a geological process called plume volcanism: a large body of magma seeped through Earth's surface and formed a blanket of basalt kilometers thick. Over time, cracks in the rock filled with water and eroded into the current rivers and lakes.