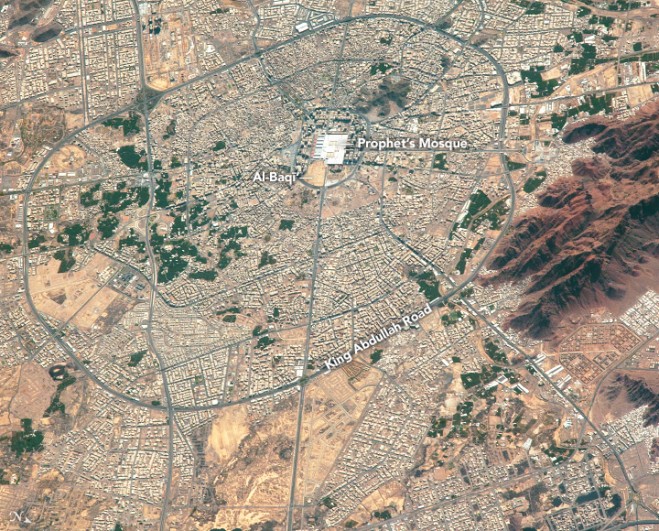 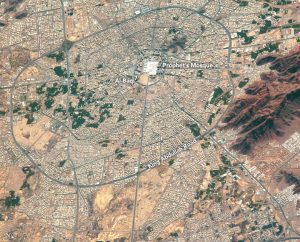 An astronaut aboard the International Space Station focused a high-resolution lens on the city of Medina (Madinah in official documents) in western Saudi Arabia. Medina is the second holiest city of Islam, and the site of the Prophet’s Mosque (Al-Masjid an-Nabawi) and the Prophet’s Tomb. The mosque, one of the largest in the world, is the focal point of the city.

Immediately east of the Mosque is an area with no buildings. (Note that north is to the right in this photo.) It is the site of the Al-Baqi’ cemetery, the resting place of many of the Prophet’s relatives and companions. The cemetery used to lie on the outskirts of early Medina. Fourteen centuries ago, the city was only about the size of the modern mosque complex.

Although people of many religions and nationalities live in the city, the core haram zone (meaning “sanctuary” or “holy shrine”), generally within King Abdullah Road, is only open to people of Muslim faith. (For scale, the diameter of the King Abdullah ring road is about 7 to 9 kilometers or 4.5 to 5.5 miles). Increasing numbers of expatriate workers—from other Arab countries, from South Asia, and from the Philippines—now live in Medina.

The Saudi Arabian government has begun a major new building project known as Knowledge Economic City just east of the closed zone (lower center of the image). This partly open land (visible on either side of King Abdul Aziz Branch Road) is being set aside for new residential and commercial development, especially high-tech, as well as hotels, museums and educational facilities for non-Muslim tourists.