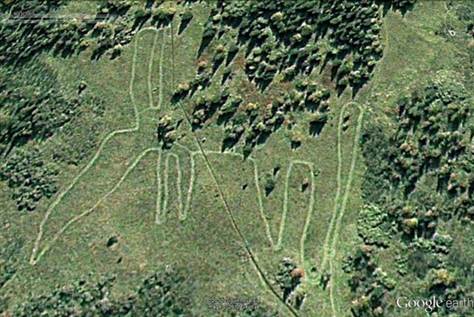 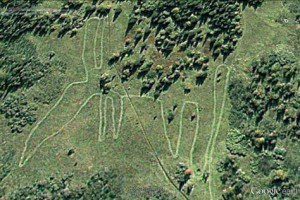 A huge geoglyph in the shape of an elk or deer discovered in Russia may predate Peru’s famous Nazca Lines by thousands of years. The stone structure, located near Lake Zjuratkul in the Ural Mountains, north of Kazakhstan, has an elongated muzzle, four legs and two antlers.

A historical Google Earth satellite image from 2007 shows what may be a tail, but this is less clear in more recent imagery. Excluding the possible tail, the animal stretches about 900 feet (275 meters) at its farthest points (northwest to southeast), the researchers estimate. It faces north and would have been visible from a nearby ridge.
“The figure would initially have looked white and slightly shiny against the green grass background,” writes Stanislav Grigoriev, Russian Academy of Sciences Institute of History & Archaeology, and Nikolai Menshenin, State Centre for Monument Protection, in an article first detailing the discovery published last spring in the journal Antiquity. They note the figure is now covered by a layer of soil.

A man named Alexander Shestakov first discovered the glyphs using satellite images. He alerted researchers, who sent out a hydroplane and paraglider to survey the giant structure. This has since progressed to an on-the-ground excavation by a team led by Grigoriev.

They’ve found that the stone architecture of the geoglyph is quite elaborate. When they excavated part of a hind leg the largest stones were on the edges and the smaller ones were inside. This past summer they also found the remains of passageways and what appear to be small walls on the hoof and muzzle of the animal.