June 4, 2014
Revisiting an Old Bird on the Greenland Ice 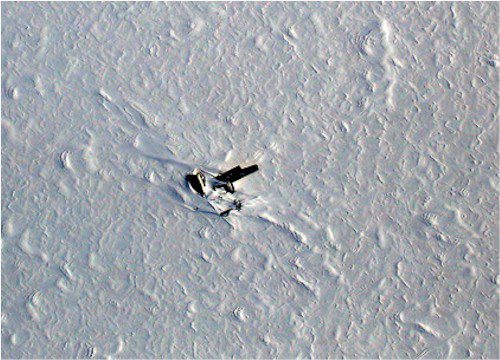 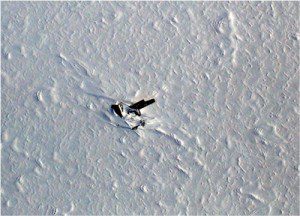 This image shows the Kee Bird, a wrecked B-29 Superfortress that made an emergency landing on a northwest Greenland ice sheet in 1947. The image was acquired on May 1, 2014, by the Digital Mapping System (DMS), an instrument attached to NASA’s P-3 Orion aircraft, which is being flown as part of the Operation IceBridge campaign.

The Kee Bird was a U.S. Air Force plane that made a crash landing after running into foul weather and other issues during a reconnaissance flight to the North Pole in 1947. The entire crew survived the crash, but then had to wait for more than three days to be found and rescued.

In the 1990s, a private group of airplane and history aficionados attempted to restore and fly the plane, only to have it catch fire in the process. The wreck still lays on the ice sheet and is slowly being covered by wind-blown snow and ice.