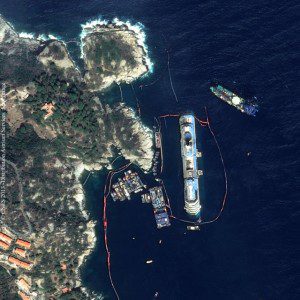 Thirty-two people died when the Costa Concordia slammed into a reef off the Tuscan island of Giglio and capsized on Jan. 13, 2012. On Oct. 8, 2013, divers searching the submerged wreck of the cruise ship found the remains of one of the two people still missing from the 2012 disaster.

The Italian commissioner in charge of the ship's cleanup said the remains are believed to be those of Russel Rebello, an Indian waiter. They were found on the third deck. Civil Protection Chief Franco Gabrielli told reporters he had immediately notified the victim's relatives, who had traveled to the island in hopes their loved one's remains could be found.