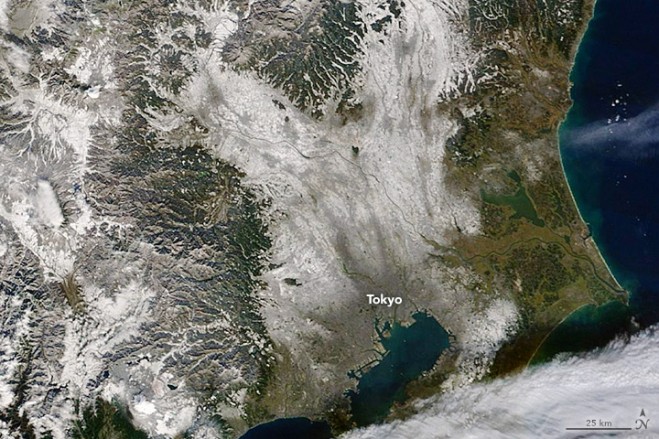 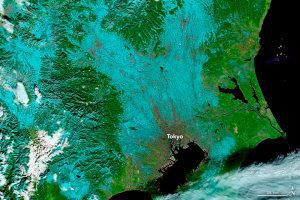 The Moderate Resolution Imaging Spectroradiometer (MODIS) on NASA’s Terra satellite captured this natural-color image of Tokyo on Nov. 24, 2016, after it received its first November snowfall in more than half a century. The snow fell in and around the Japanese capital, coating the metropolitan area and accumulating along some sidewalks.

The snow traces the contours of surrounding mountains and is distinguishable from clouds offshore. Central Tokyo is gray-brown in color, suggesting less accumulation or faster melting. Urban centers tend to shed snow faster than surrounding countryside because they’re often hotter due to the urban heat-island effect.

The November dusting was caused by a cold air mass moving down from the Arctic, according to the Japan Meteorological Agency. Meteorologists connected the storm to the Arctic oscillation, a climate pattern that affects the northern hemisphere. Usually, high air pressure in the mid-latitudes prevents colder, low-pressure air seeping down from the Arctic. However, weaker pressure systems occasionally disrupt this barrier, and colder air can penetrate further south.