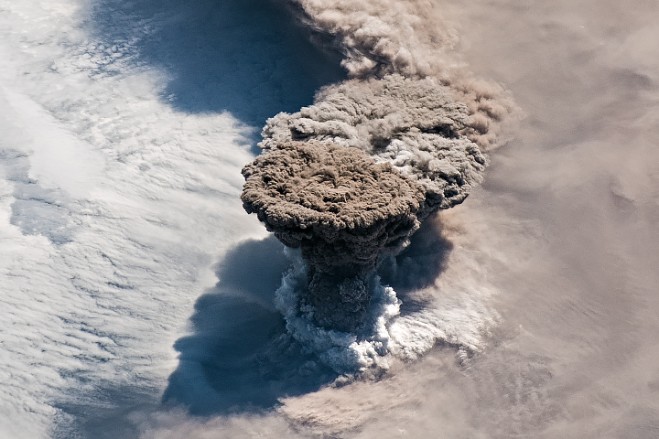 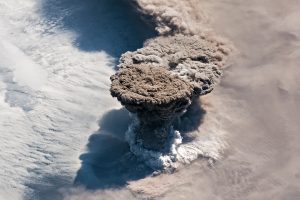 Unlike some of its perpetually active neighbors on the Kamchatka Peninsula, Raikoke Volcano on the Kuril Islands rarely erupts. The small, oval-shaped island most recently exploded in 1924 and in 1778.

The dormant period ended on June 22, 2019, when a vast plume of ash and volcanic gases shot up from its 700-meter-wide crater. Several satellites—as well as astronauts on the International Space Station—observed as a thick plume rose and then streamed east as it was pulled into the circulation of a storm in the North Pacific.

On the morning of June 22, astronauts shot this photograph of the volcanic plume rising in a narrow column and then spreading out in a part of the plume known as the umbrella region. That is the area where the density of the plume and the surrounding air equalize and the plume stops rising. The ring of clouds at the base of the column appears to be water vapor.

“The ring of white puffy clouds at the base of the column might be a sign of ambient air being drawn into the column and the condensation of water vapor,” said Simon Carn, a volcanologist at Michigan Tech. “Or it could be a rising plume from interaction between magma and seawater, because Raikoke is a small island and flows likely entered the water.”