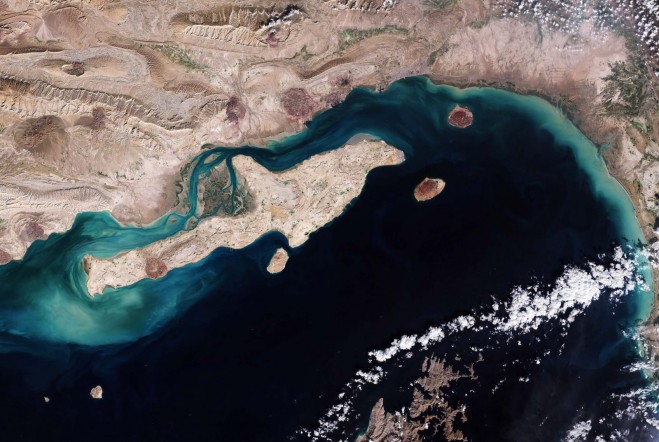 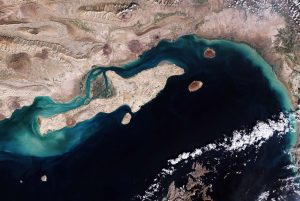 Qeshm Island—the largest island in Iran—lies in the Strait of Hormuz, parallel to the Iranian coast from which it’s separated by the Clarence Strait (Khuran). With an area of around 1,200 square kilometers, the island has an irregular outline and shape often compared to that of an arrow. The island is approximately 135 kilometers long and spans around 40 kilometers at its widest point.

This image from the Copernicus Sentinel-2 mission shows the largely arid land surfaces on both Qeshm Island and mainland Iran. The island generally has a rocky coastline except for the sandy bays and mud flats that fringe the northwest part of the island.

The Hara Forest Protected Area, a network of shallow waterways and forest, can be seen clearly in the image, between Qeshm Island and the mainland. Hara, which means “gray mangrove” in the local language, is a large mangrove forest and protected area that brings more than 150 species of migrating birds during spring, including the great egret and the western reef heron. The forest also hosts sea turtles and aquatic snakes.

The dome-shaped Namakdan mountain is visible in the southwest part of the island and features the Namakdan Cave—one of the longest salt caves in the world. With a length of six kilometers, the cave is filled with salt sculptures, salt rivers and salt megadomes.

Several cloud formations can be seen in the bottom-right of the image as well as a part of the Musandam Peninsula, the northeastern tip of the Arabian Peninsula. The peninsula’s jagged coastline features fjordlike inlets called “khors” and its waters are home to dolphins and other marine life.