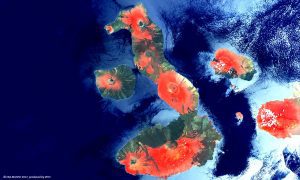 A Proba-V satellite view shows the internationally protected, volcanic archipelago of the GalÃ¡pagos and its surrounding marine reserve. This island chain is renowned for its many endemic species that were studied by Charles Darwin, directly contributing to his famous theory of evolution by means of natural selection.
In 1535, the Spaniard TomÃ¡s de Berlanga, fourth bishop of Panama, first visited these islands by chance when he was sailing to Peru. On the maps of Mercator and Ortelius, famous geographers, the islands were named Insulae de los Galopegos or Islands of the Tortoises after the giant tortoises found there.
This false-color composition highlights vegetation in red on the flanks of several volcanoes, in particular Wolf, Darwin, Alcedo, Santo TomÃ¡s and Cerro Azul volcanos on Isla Isabella, the largest island.
Proba-V is a miniaturised ESA satellite tasked with a full-scale mission: to map land cover and vegetation growth across the entire planet every two days.