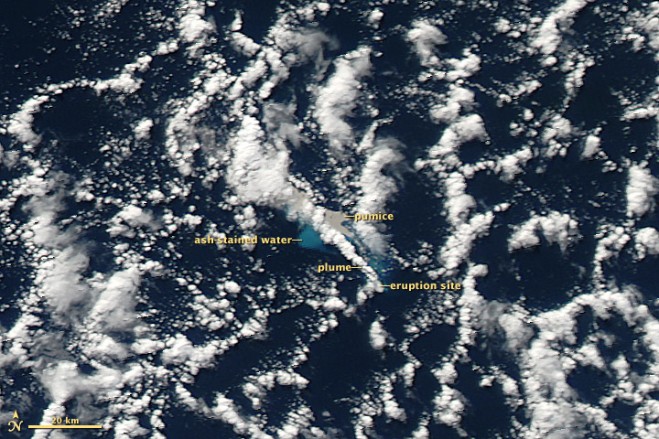 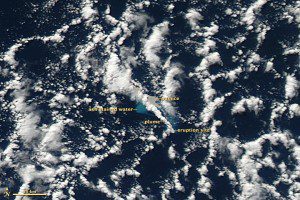 NASA’s MODIS instrument provided data that tie an underwater volcanic eruption in the Kermadec Islands on July 17 and 18 to a cluster of earthquakes in the area. Click on image to enlarge.

A month’s worth of satellite imagery revealed the source of giant chunks of floating pumice up to two feet thick and a kilometer wide, surprising the crew of the New Zealand ship HMNZS Canterbury during its early August voyage from Auckland to Raoul Island.

Although the pumice was spread over a vast area of the South Pacific, the origin was a mystery to the ship’s crew. An undersea volcano several hundred kilometers to the north of the pumice—Monowai—had erupted on Aug. 3, but an airline pilot reported seeing pumice as early as Aug. 1.
Two data sources provided clues to pinpoint the volcano: earthquake records and satellite imagery. After reports of the pumice rafts surfaced, scientists from Tahiti and New Zealand’s GNS Science connected the eruption with a cluster of earthquakes in the Kermadec Islands on July 17 and 18.