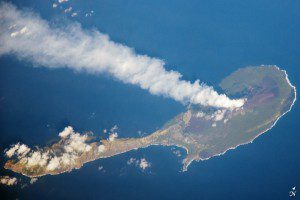 Pagan is part of the Commonwealth of the Northern Marianas, an island chain of volcanoes that form the margin between the Pacific Ocean (to the east) and the Philippine Sea (to the west). Pagan is made up of two stratovolcanoes separated by an isthmus, and it is one of the more volcanically active islands in the Marianas. The island was completely evacuated in 1981 when a large eruption forced the small Micronesian community to flee.