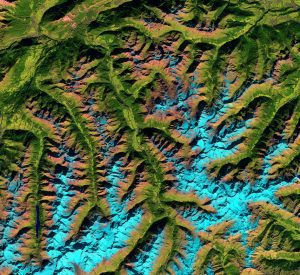 The shadows across this image taken by the European Space Agency (ESA) Copernicus Sentinel-2A satellite image may play tricks on the human eye, making the valleys—the green areas—look like they stand higher than the light blue mountains. Sometimes rotating the image so the shadows fall in a different direction can “fix” this optical illusion.
Snow appears in shades of blue in this unusual false-color image using light in the near- and shortwave infrared part of the spectrum. This coloring makes it easier to distinguish between snow and vegetation. It also allows us to differentiate between clouds and snow, which is difficult in other parts of the spectrum as they are usually both white. But there are no clouds visible in this image to demonstrate the effect.
In the upper left is the Inn River, flowing east from the Swiss Alps and through Austria and Germany before entering the Danube (not pictured). The land in the Inn river valley and other river valleys appear green with patches of agriculture.
The highest peak in the Ötztal range is Wildspitze, standing over 3,770 meters. The mountain is visible in the lower-left corner, east of the elongated lake, Gepatschspeicher.
A well-preserved natural mummy of a man from about 5,300 years ago was found just 12 kilometers south of Wildspitze. The body was discovered by two tourists in 1991, and named “Ötzi” after the Ötztal Alps.
Although the discovery of the mummy allowed for new insights into the Chalcolithic period, it also revealed new information on changes in climate over the last millennia. Together with other evidence, the burial of the corpse by snow and ice indicates a rapid climactic cooling soon after his death, preserving the body for more than 5,000 years before glacial melt from rising temperatures exposed the mummy.