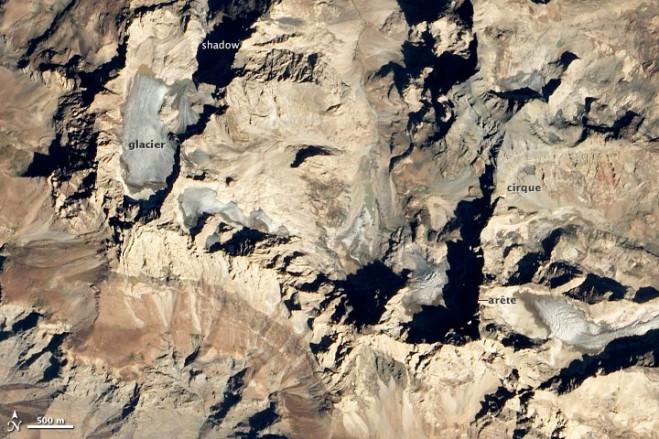 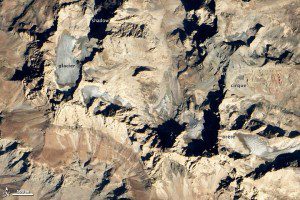 When it comes to glaciers, Turkey probably isn’t the first country that comes to mind. However, numerous peaks in the rugged mountains of eastern Turkey are high enough and cold enough to sustain year-round ice.

About two-thirds of Turkey’s glaciers lie within the Tauras Mountains, a chain of peaks that stretches from the Mediterranean coast toward the borders of Iran and Iraq. The southeastern portion of the range supports Turkey’s largest glaciers.

Geologists and explorers have surveyed Mount Uludoruk’s glaciers from the ground for more than a century. In 1901, Major F.R. Maunsell, a British officer, published one of the first photographs of the mountain’s glaciers in a Royal Geographic Society journal. In 1937, geologists reported the terminus of the glacier in Maunsell’s grainy photograph was at a height of about 2,600 meters (8,500 feet). By the 1950s, the same tongue of ice had retreated to 2,900 meters (9,500 feet).
A new analysis of satellite imagery led by Fatih University’s Mehmet Sarikaya, which will be published in 2013, concluded that the glaciers have continued their retreat since the 1950s. Sarikaya found that Uludoruk glacier retreated 12 meters (39 feet) per year between 1948 and 2009.