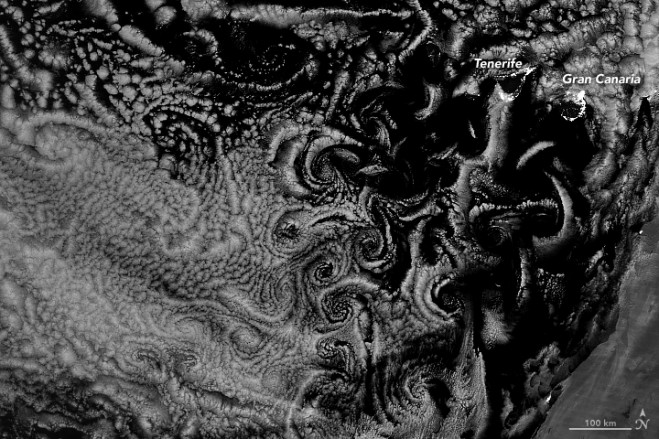 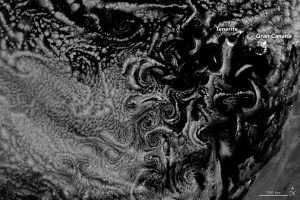 Our atmosphere behaves like a fluid, changing its flow and direction when it runs into an obstacle. Sometimes we can see (and feel) these movements on a small scale, as winds blow trees and water. Satellites, however, can observe these twists and bends on a broad scale as they create interesting shapes in the sky.

This image shows spiraling cloud patterns off the coast of Morocco on July 19, 2019. Known as von Kármán vortices, these eddies can form nearly anywhere that fluid flow is disturbed by a solid object. In this case, the vortices formed when winds flowed around small islands in the North Atlantic.

“The basic idea is that flow over, and around, a mountainous island slows down,” said George Young, professor of meteorology at Penn State University. This creates a vertical wall of whirling air—with faster wind flowing past slower wind below. These sheets can wrap themselves into vortices and shed alternately off the two sides of the island. They can subsequently travel downwind from the island to create “vortex streets,” as seen in this image. The pattern of the spirals depends on the intensity of the wind.

“This is a spectacular satellite image,” said Paul Beggs, an associate professor at Macquarie University. “I don’t recall having seen an image of von Kármán vortices at nighttime previously, so I would consider it rare.” Atmospheric vortices are commonly observed by satellites, and Earth Observatory has shown them many times. But we have rarely noted them in nighttime imagery.