November 1, 2011
Night Lights Glimmer from Above and Below 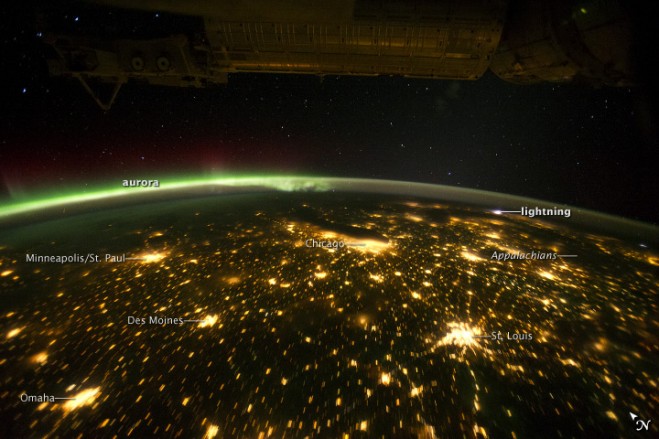 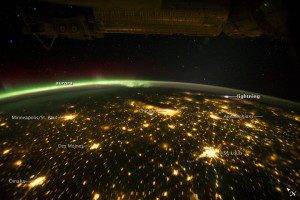 When viewed from the International Space Station (ISS), the night skies are illuminated with light from many sources. For example, the Midwestern United States presents a nighttime appearance not unlike a patchwork quilt when viewed from orbit.

The artificial light from human settlements appears with a characteristic yellow tinge. The green light of the aurora borealis also shines brightly in this view—even seeming to reflect off Earth’s surface in Canada. A small white patch of light is almost certainly lightning from a storm on the East coast (image top right). Part of the ISS appears across the top of the image.

This astronaut photograph highlights the Chicago metropolitan area as the largest cluster of lights, next to the dark patch of Lake Michigan. The other largest metropolitan areas include St. Louis, Minneapolis–St. Paul, and the Omaha–Council Bluffs region on the Nebraska–Iowa border. The northeastern seaboard lies just beyond the Appalachian Mountains, a dark winding zone without major cities.

Light clusters give an immediate sense of relative city size. Demographers have used night-time satellite imagery to make estimates of city populations—especially in the developing world, where growth can be rapid.

The sense of scale changes significantly in oblique views. Des Moines is 200 kilometers from Omaha and 375 kilometers from Minneapolis, yet the distances appear roughly the same in this view. In addition to the major metropolitan areas, the rectangular north-south-east-west layout of townships is clearly visible in the rural, lower left of the image. This pattern instantly gives the sense of north orientation (toward the top left corner) and is a distinctive characteristic of the United States that helps astronauts quickly know which continent they are flying over at night.

In contrast to the regular township pattern, interstate highways converge on St. Louis, Chicago and other large cities, much like wheel spokes around a central hub. Rivers—major visual features in daylight—become almost invisible at night. The course of the Mississippi River appears as a slightly meandering zone from Minneapolis through St. Louis and continues out of the lower right corner.

This astronaut photograph was acquired onSept. 29, 2011, with a Nikon D3S digital camera using a 20mm lens and is provided by the ISS Crew Earth Observations experiment and Image Science & Analysis Laboratory, Johnson Space Center. The image was taken by the Expedition 29 crew. Caption by M. Justin Wilkinson, Jacobs/ESCG at NASA-JSC.