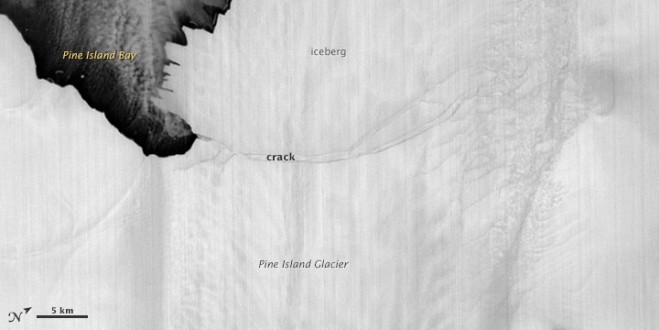 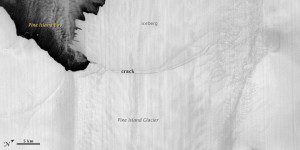 The longest and fastest moving glacier in West Antarctica calved a new iceberg in July 2013, as shown in this Terra satellite image.

The Advanced Spaceborne Thermal Emission and Reflection Radiometer (ASTER) instrument, built by Japan’s Ministry of Economy, Trade, and Industry for NASA’s Terra satellite, acquired an image of two widening cracks along an edge of the Pine Island Glacier in Antarctica. To the west of the cracks—in the image, north is to the upper right—a new 720-square-kilometer (280-square-mile) ice island was formed.

The rift that led to this new ice island was discovered in October 2011 during an instrumented airplane flight in NASA’s annual Operation IceBridge campaign. At the time, the crack was about 24 kilometers (15 miles) long and 50 meters (160 feet) wide. For two years, researchers examined satellite and airborne imagery, as well as data from ice-based instruments, to see when the rift would fully open. In May 2012, they observed the opening of a second crack. And just before the calving this summer, the original rift was roughly 28 kilometers (17 miles) long and 540 meters (1,770 feet) wide.