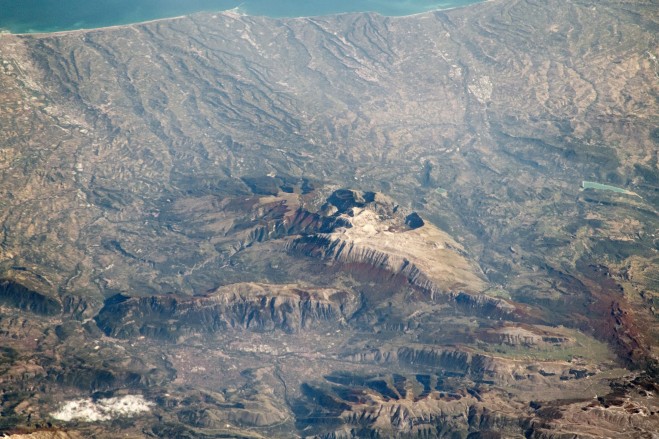 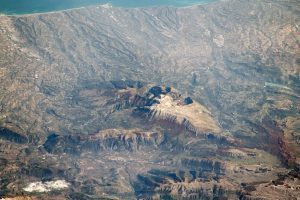 An astronaut on the International Space Station took this oblique photograph of the Maiella Massif, which stands amidst Italy’s Central Apennine Mountains. Located just 40 kilometers (25 miles) from the Adriatic Sea coastline, the Maiella Massif abruptly rises more 2,700 meters (9,000 feet) above sea level. Shadows and the oblique viewing angle give a strong three-dimensional sense to the steep, blocky cliffs and the dendritic drainage channels leading to the coast.

Complicated tectonics elevated the Maiella Massif from rock layers that were originally deposited at the bottom of the sea between 23 and 100 million years ago. The highest peak of the massif, Monte Amaro, is made of a light-colored limestone. Below the noticeably bare high plains, the tree line cuts across steep slopes. Since the photo was shot during local autumn, the tree line has a dark, reddish hue of fall color.

The massif is a geologic formation called an anticline, an arch-like structure of folded rock layers that can trap petroleum. Maiella was important to Italy’s oil industry in the 19th and 20th centuries, though far fewer exploration wells have been drilled there in recent years.

In 1991, Maiella National Park was created to preserve the area’s unique biodiversity and archaeological significance in the Apennines.