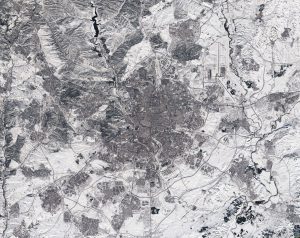 Captured by the Copernicus Sentinel-2 mission on Jan. 11, 2021, this image of Madrid appears to have been taken in black and white. In fact, it is a true-color image”but the heaviest snowfall in 50 years has blanketed the region, turning the landscape white.

Storm Filomena blanketed parts of Spain in thick snow, leaving half the country on red alert. Madrid, one of the worst-affected areas, was brought to a standstill with the airport having to be closed, trains cancelled and roads blocked.

Although this satellite image was taken after the storm had passed, it's clear that much snow still remains, especially in the outskirts of the city. For example, some runways at the airport, which is visible in the top-right of the image, are still covered by snow. The race is on to clear roads so supplies of essential goods such as food supplies and Covid vaccines can be delivered.