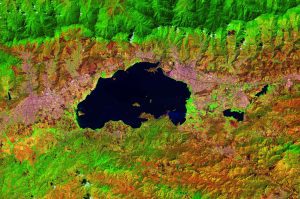 The Copernicus Sentinel-2 mission collected this false-color image of Lake Valencia in northern Venezuela. The image was processed in a way that makes vegetation of the Henri Pittier National Park, north of the lake, appear in fluorescent green. These bright colors contrast with the blackness of the lake.

With a surface area of 370 square kilometers, Lake Valencia formed a few million years ago and is now a reservoir for the cities of Valencia on the west shores and Maracay on the east shores.

Unfortunately, the inflow of untreated wastewater from the surrounding industrial and agricultural lands has led to the lake to become contaminated. The lake now suffers from algal blooms, and between 1960 and 1990 it lost more than 60 percent of its native fish species. The now poor-quality waters of Lake Valencia prevent the development of tourism and recreational activities in the region.