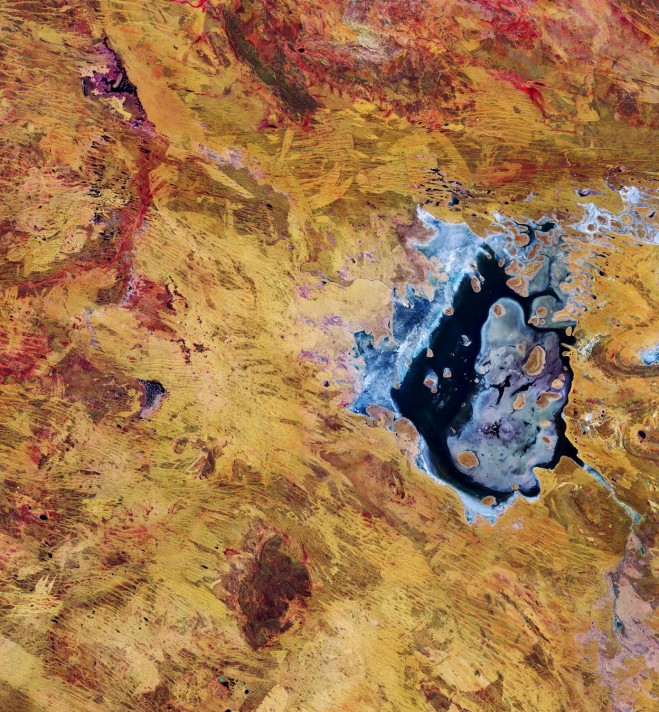 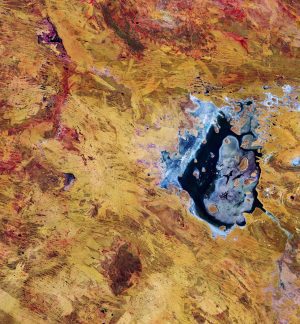 The Copernicus Sentinel-2A satellite takes us over Lake Disappointment in northwest Australia. Found in one of the most-remote areas of the country, it’s believed to have been discovered by an early explorer called Frank Hann in 1897. He was convinced that the series of creeks he had been following in the east Pilbara area would lead to a freshwater lake and drinking water supply. Such was his disappointment to find a salt lake at the end of his journey, he gave the lake its memorable name.

Although the lake is dry most of the time, it’s home to many species of water birds. When full, primarily during very wet periods, the lake retains water and allows no outflow and is hence classified as an endorheic basin.

In this false-color image, the differences in the shades of blue in the lake reflect the depth of the water. The darker the blue, the deeper the water. A higher concentration of salt also may explain the different colors of the water around the edges of the lake.

It’s likely that the red lines spread across the top part of the image represent some form of vegetation in this predominantly arid area on the edge of the Gibson Desert. Karlamilyi National Park, Western Australia’s largest and most-remote national park, can be found north of the lake. The park spans more than 1.3 million hectares between the Great Sandy Desert and the Little Sandy Desert.

Covering an area of almost 380,000 square kilometers, the Shire of East Pilbara, also to the north of the lake, is the third-largest municipality in the world. The population was registered as only around 11,000 in 2017, with mining constituting the backbone of the local economy.