Japanese Volcano Once Was an Island 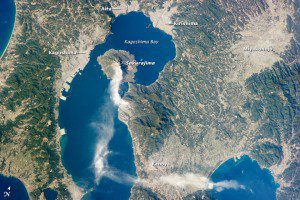 This Jan. 10, 2013, photograph acquired by astronauts on the International Space Station highlights Sakurajima, one of Japan's most active volcanoes. Sakurajima began forming approximately 13,000 years ago. Prior to 1914, it was an island in Kagoshima Bay, but it was joined to the mainland by the deposition of volcanic material following a major eruption that year.
Several craters lie near Sakurajima's 1,117-meter summit. The northernmost crater, Kita-dake, last erupted approximately 5,000 years ago; to the south, Minami-dake and Showa craters have been the site of frequent eruptions since at least the eighth century. The ash plume visible near the volcano's summit may have originated from either Minami-dake or Showa.