December 17, 2013
Islands of the Four Mountains Rise from the Sea 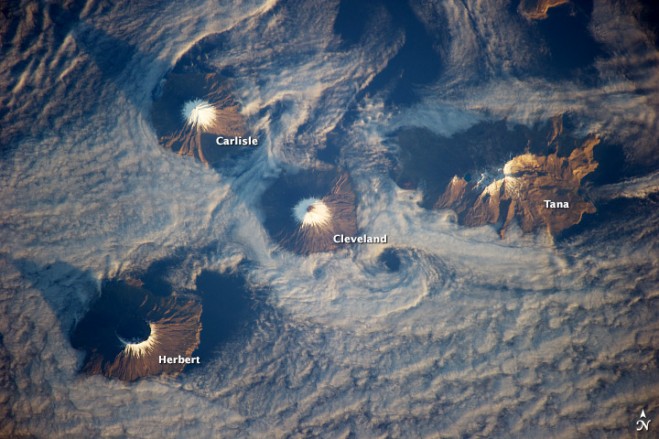 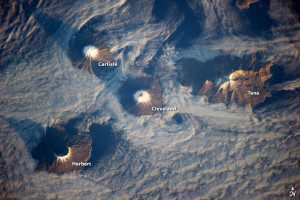 Cleveland volcano and the Tana volcanic complex form the eastern and western ends, respectively, of Chuginadak Island. A cloud bank obscures the connecting land mass in this image.

Morning sunlight illuminates the southeast-facing slopes of the Islands of the Four Mountains in this photograph taken from the International Space Station (ISS). The islands, part of the Aleutian Island chain, are actually the upper slopes of volcanoes rising from the sea floor.

The four volcanoes are Carlisle, Cleveland, Herbert and Tana. Cleveland volcano (elevation 1,730 meters above sea level) is one of the most active in the Aleutian chain, with its most recent activity—eruptions and lava flow emplacement—occurring in May 2013. An ISS crew captured an earlier eruption in 2006.

The northernmost of the islands, Carlisle volcano (peak elevation 1,620 meters), had its last confirmed eruption in 1828, with unconfirmed reports of activity in 1987.