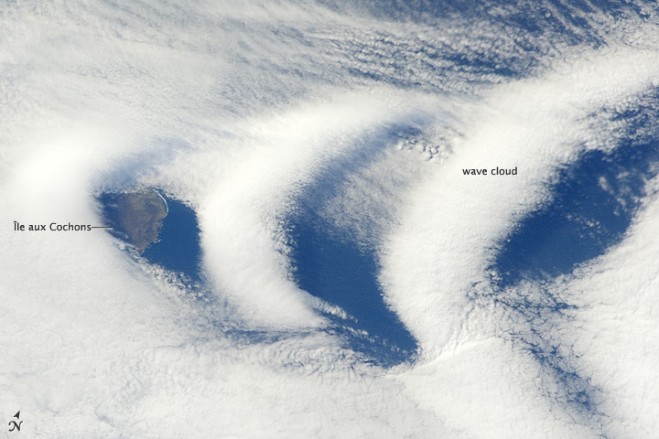 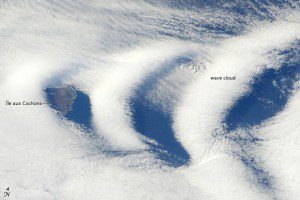 This astronaut photograph illustrates the formation of wave clouds in the wake, or downwind side, of Île aux Cochons, often called Pig Island, in the southern Indian Ocean. The island’s summit elevation is high enough to interact with cloud layers and flowing winds. Once air masses pass over the summit, they descend and may encounter alternating moist and dry air layers, enabling the formation of the discontinuous, chevron-shaped wave clouds.

The island is located approximately 3,000 kilometers (1,900 miles) southeast of South Africa. In this view from the International Space Station, only a part of the eastern coastline is visible.

The island is volcanic in origin and has a summit elevation of 775 meters (2,543 feet) above sea level. The island’s stratovolcano is thought to have erupted within the past 12,000 years; however, no historical activity has been recorded.

In this image, two cloud layers are visible. The lower, more uniform layer consists of roughly parallel “cloud streets” that suggest the winds blowing out of the west. When air masses run into the summit of Île aux Cochons, moisture-laden air rises and cools, causing water vapor to condense into clouds.