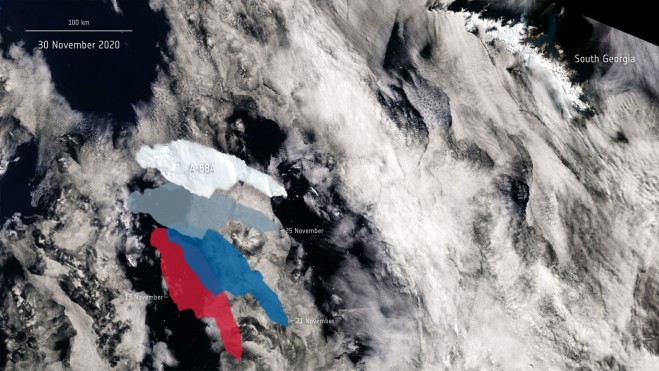 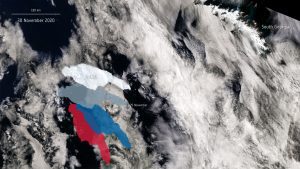 All eyes remain on the giant A-68A iceberg on its journey across the Southern Ocean. This image shows A-68A’s movements using data from the Copernicus Sentinel-1 and Sentinel-3 missions.

Since its “birth” in 2017, the iceberg has travelled thousands of kilometers from the Larsen C ice shelf, in Antarctica, and now lies just 210 kilometers from South Georgia. The berg, which is approximately 150 kilometers long and 48 kilometers wide, is said to be one of the largest icebergs on record.

This Copernicus Sentinel-3 image shows A-68A’s position on Nov. 30, 2020, with the iceberg’s previous positions derived from Sentinel-1 radar data. As seen in the image, the iceberg has drifted substantially over the last two weeks.

It’s still unclear whether A-68A will reach South Georgia in the coming months, or whether currents will carry A-68A further northwest, where it will eventually break up into smaller bergs.