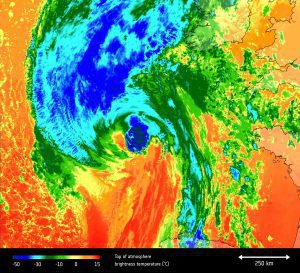 The European Space Agency (ESA) Copernicus Sentinel-3A satellite saw the temperature at the top of Hurricane Ophelia on Oct. 15, 2017, as the storm approached the British Isles. Ophelia has since been downgraded from a hurricane to a storm.

The brightness temperature of the clouds at the top of the storm, some 12-15 kilometers above the ocean, range from about -50Â°C near the eye of the storm to about 15Â°C at the edges. Sentinel-3's Sea and Land Surface Temperature Radiometer measures energy radiating from Earth's surface in nine spectral bands and two viewing angles.