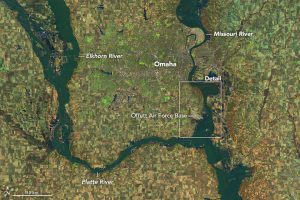 In the wake of an intense winter storm, historic floods have broken out across the central United States. By mid-March 2019, several streams and rivers had risen to all-time record levels in Nebraska, Iowa, South Dakota and Wisconsin.

Nebraska has been particularly hard hit. On March 16, 2019, the Operational Land Imager (OLI) on Landsat 8 captured this false-color image that underscores the extent of the flooding on the Platte, Missouri and Elkhorn Rivers.

Several communities west of Omaha (between the Elkhorn and Platte Rivers) either flooded or temporarily became islands as floodwaters encroached from both sides. One third of Offutt Air Force Base was inundated and 30 buildings were damaged, according to news reports. Rising flood waters forced people in dozens of communities to evacuate.

A rare confluence of circumstances produced the flooding. Extreme cold earlier in the winter set the stage by preserving a significant amount of snow; it also created a thick layer of ice on waterways and made the ground less permeable than usual. When an intense storm brought downpours and unusually warm air to the region in March, it rapidly melted much of the snow and ice, producing enormous runoff in a short period. As river ice broke up, large chunks compounded the problem by slamming into dams, raking against levees and other infrastructure, and packing together to jam waterways even more.