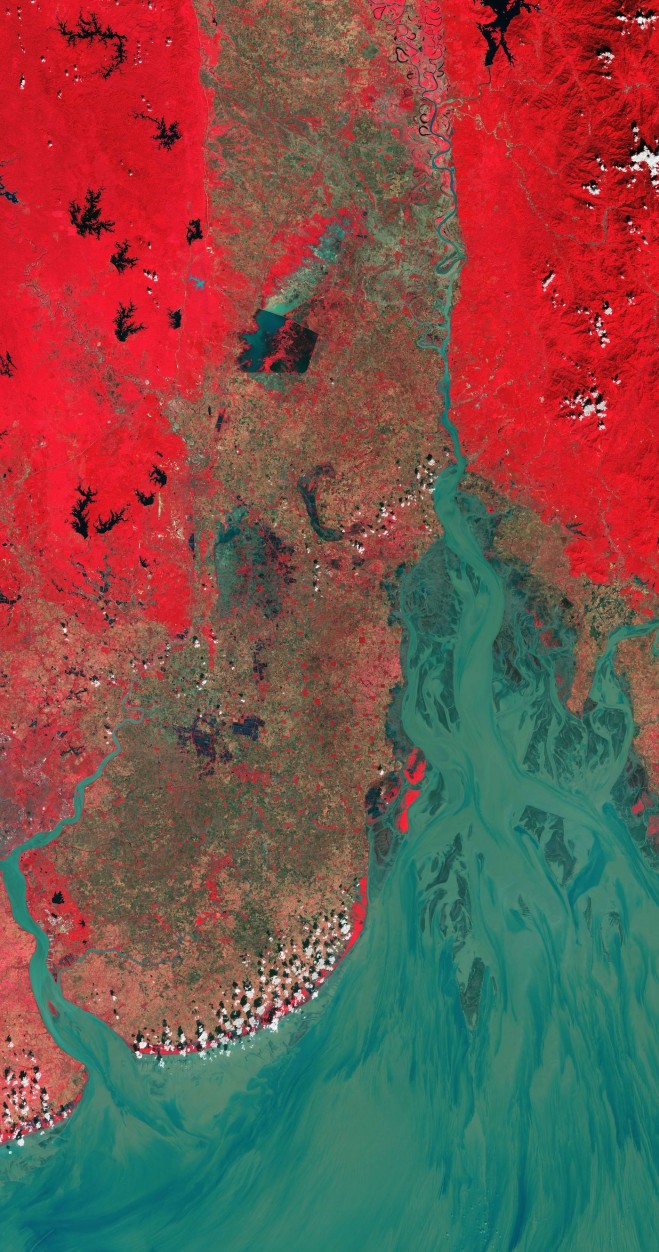 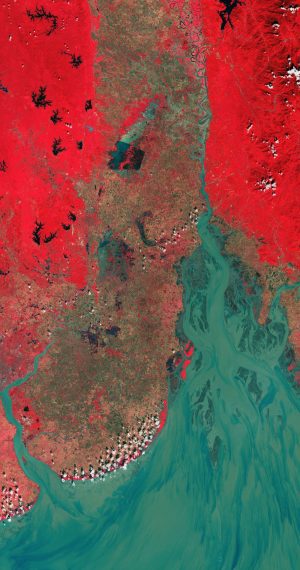 The Gulf of Martaban, an arm of the Andaman Sea located in southern Myanmar, is featured in this false-color image captured by the Copernicus Sentinel-2 mission. The image has been processed in a way that included the near-infrared channel, which makes vegetation appear bright red.

The gulf, also known as Gulf of Mottama, is named after the port city of Mottama, formerly known as Martaban. The Gulf of Martaban is considered a unique estuarine mudflat environment that is home to a great variety of flora and fauna. Fed by sediment and nutrients from three major rivers (Sittang, Salween and Yangon), the gulf supports a number of species including marine fish, 150,000 migratory birds as well as supporting the livelihood of tens of thousands of people.

A notable characteristic of the gulf is that it has a tide-dominated coastline, with tidal ranges between six and seven meters. The mouth of the gulf, which is approximately 100 kilometers wide, narrows into a funnel-shaped bay to produce a powerful tidal bore phenomenon that can reach heights of more than a meter in the upper estuary. As a result, the tidal mudflats of the gulf are among the largest in the world.

The Sittang River, visible in the right side of the image, originates near Mandalay, Myanmar, and flows southward for around 420 kilometers before emptying into the gulf. Dense vegetation can be seen in bright red, particularly in the left of the image.

The distinct rectangular shape, visible in the upper half of the image, is part of the Moeyungyi Wetland Wildlife Sanctuary, a designated Ramsar Site of International Importance. The site encompasses several artificial lakes and bodies (visible in black). One of the bodies of water appears in light blue most likely owing to eutrophication: the overabundance of algae, phosphorus and other plant nutrients.

The city of Yangon is visible in the bottom-left of the image, at the convergence of the Yangon and Bago Rivers. With more than 7 million people, Yangon is Myanmar’s most populous city and its most important commercial centre. The city served as the country’s capital until 2006.