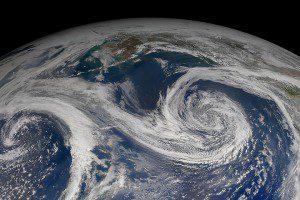 This image shows the southern Alaska coast and the Gulf of Alaska collected by NASA's Aqua satellite on May 2, 2014. It is a composite knitted together from several orbits. Two comma-shaped cloud formations (image center and far left) dominate the skies over the North Pacific Ocean. Dark green traces of a phytoplankton bloom are just visible off the Alaska coast at top center.

Springtime brings increased sunlight, bursts of nutrients and changing water conditions to the Gulf of Alaska, setting the stage for explosive blooms of aquatic plants and phytoplankton”and then the many crabs, fish and whales that feed on them. The combination promotes massive blooms of phytoplankton”microscopic, plant-like organisms that turn sunlight into food and then become fodder for some of the richest fisheries on the planet. 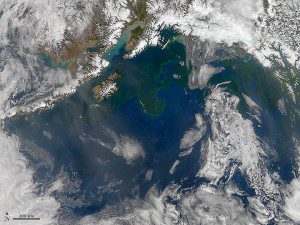 This Aqua image shows a tighter view of the Gulf on May 9, 2014, when a substantial bloom of phytoplankton colored the waters south of Prince William Sound with green, chlorophyll-rich life. Closer to the coast, the water has a tan tint, a sign of sediment in the water”likely runoff from snowmelt-swollen rivers dumping their excess into the sea.

The waters around Alaska are among the most biologically productive in the world. Ash from the many volcanoes and wind-blown glacial powder occasionally seed the seas with the nutrients necessary for phytoplankton growth. The rivers carry their share of rich sediments, and the stormy, turbulent waters offshore sweep up a fair bit from the seafloor.