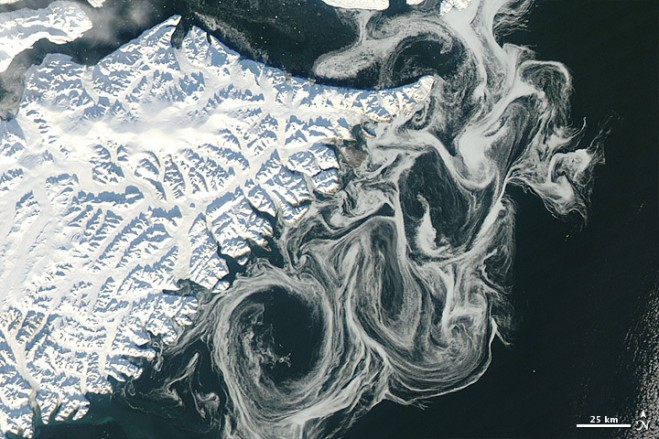 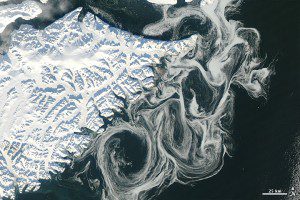 Thin, free-drifting ice moves easily with winds and currents. In fact, this ice along Greenland’s coast moved discernibly between Oct. 16 and 17, 2012. Click on image to enlarge.

Seawater off the east coast of Greenland looked a bit like marbled paper in October 2012. The shifting swirls of white in this image were sea ice, as observed by NASA’s Aqua satellite on Oct. 17, 2012.

Each year, Arctic sea ice grows through the winter, reaching its maximum extent around March. It then melts through the summer, reaching its minimum in September. By October, Arctic waters start freezing again. However, the ice in the accompanying image is more likely a remnant of old ice that migrated down to the coast of Greenland. Seawater is unlikely to start freezing this far south in October.
Along Greenland’s east coast, the Fram Strait serves as an expressway for sea ice moving out of the Arctic Ocean. The movement of ice through the strait used to be offset by the growth of ice in the Beaufort Gyre. Until the late 1990s, ice would persist in the gyre for years, growing thicker and more resistant to melt. Since the start of the 21st century, however, ice has been less likely to survive its trip through the southern part of the Beaufort Gyre. As a result, less Arctic sea ice has been able to pile up and form multiyear ice.