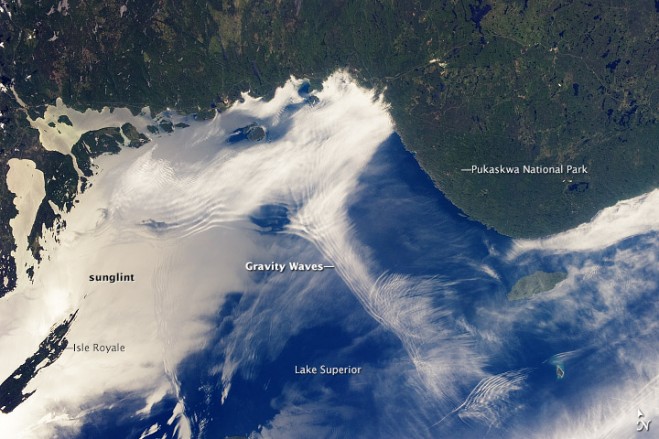 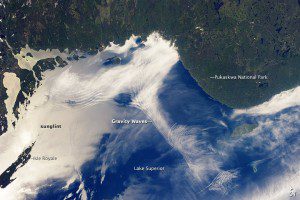 Astronauts often observe atmospheric and surface phenomena in ways that are impossible to view from the ground, as illustrated in this photograph of Lake Superior that exhibits both at once.

Gravity waves are produced when moisture-laden air encounters imbalances in air density, such as might be expected when cool air flows over warmer air. This can cause the flowing air to oscillate up and down as it moves, causing clouds to condense as the air rises and cools and to evaporate away as the air sinks and warms. This produces parallel bands of clouds oriented perpendicular to the wind direction. The orientation of the cloud bands in this image, parallel to the coastlines, suggests that air flowing off of the land to the north interacts with moist, stable air over the lake surface, creating gravity waves.

The second phenomenon—sunglint—affects the water surface around and to the northeast of Isle Royale. Sunglint is caused by light reflecting off a water surface; some of the reflected light travels directly back toward the observer, resulting in a bright mirror-like appearance over large expanses of water.