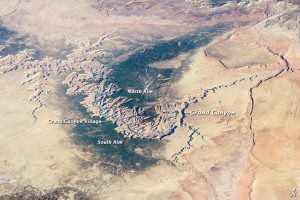 This astronaut photograph was acquired March 25, 2014, with a Nikon D3S digital camera using a 180-millimeter lens. The image has been cropped and enhanced to improve contrast, and lens artifacts have been removed.

The Grand Canyon in northern Arizona is a favorite for astronauts shooting photos from the International Space Station as well as one of the best-known tourist attractions in the world. The steep walls of the Colorado River canyon and its many side canyons make an intricate landscape that contrasts with the dark green, forested plateau to the north and south.

The Colorado River has done all the erosional work of carving away cubic kilometers of rock in a geologically short period of time. Visible as a darker line snaking along the bottom of the canyon, the river lies at an altitude of 715 meters (2,345 feet), thousands of meters below the North and South Rims. Temperatures are furnace-like on the river banks in the summer. But Grand Canyon Village, the classic outlook point for visitors, enjoys a milder climate at an altitude of 2,100 meters (6,890 feet).