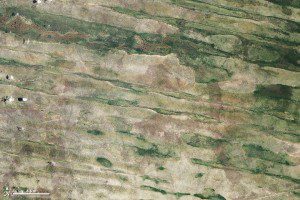 In far northeastern Namibia, there's a skinny stretch of land sandwiched between Angola, Botswana and Zambia where the land is striped, as if a giant had dragged a rake over the landscape. On Feb. 1, 2012, the Advanced Land Imager on NASA's Earth Observing-1 satellite captured this natural-color image of the Caprivi Strip just north of the Okavango River.

The Caprivi Strip receives more than 600 millimeters (24 inches) of mean annual rainfall and experiences periodic floods, making it almost moist compared to the much drier parts of the country. The stripes are linear dunes, and some are more than 100 kilometers (60 miles) long. Their presence suggests much drier conditions in the past.

Dunes generally form from wind-blown sand over many years. One characteristic of linear dunes is that they tend to remain intact long after the dry conditions cease. And because they don't migrate like marching dunes, linear dunes preserve dirt and rocks that geologists can later use to understand past conditions.