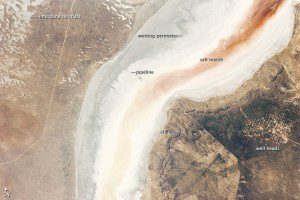 The Sor Kaydak in Kazakhstan is a salt marsh that leads into the northeastern bulb of the Caspian Sea. The central 50 kilometers of the 180-kilometer marsh depression is shown in this photograph from the International Space Station.

Water in the marsh takes on different colors”from brown to pink to light green, moving northeast to southwest”as a result of the interplay of water depth and the resident organisms such as algae. Algae color varies, depending on water temperature and salinity.

Irregular gray areas (top left) are wet zones between low sand dunes. These interdune flats are whitened with salt that comes from the evaporation of Caspian Sea water. The sea is just beyond the top left of the image. The jagged line following the colored water is the limit of the wetting zone (or perimeter), an irregular zone influenced by wind and the depth of water in the marsh.

Small cliffs mark the eastern margin of the depression that contains Sor Kaydak. Above the cliffs, a plateau”about 200 meters above the salt marsh, 160 meters above global sea level”extends eastward for hundreds of kilometers. Here the plateau is occupied by a dense pattern of well heads, which appear as a geometric pattern of tan dots. By contrast, the west margin (image left) rises less than 10 meters above the marsh.