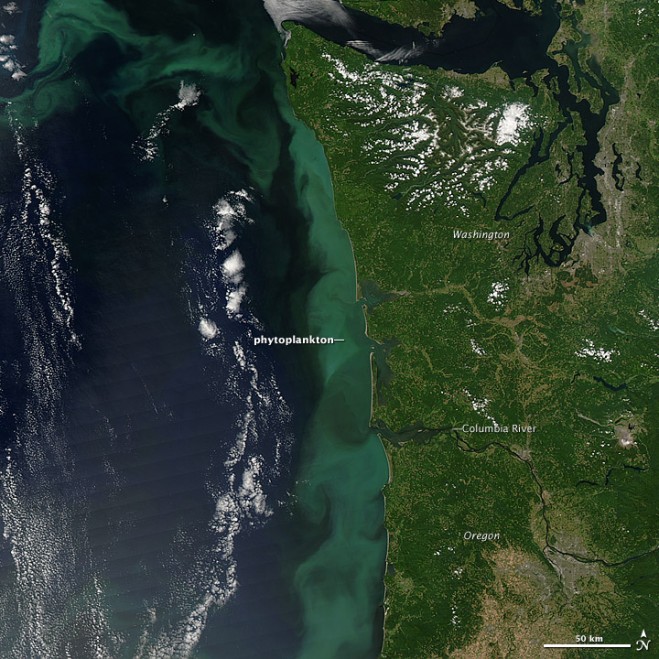 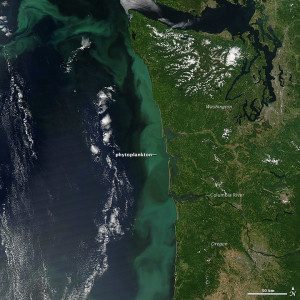 The water is darker in the area just offshore from the Columbia River. As the river enters the ocean, it generates a freshwater plume that mixes with the surrounding seawater. The dark patch could be an area with less phytoplankton, but it could also be full of different species that do not show up as well in natural color imagery.

On July 26, 2014, NASA’s Aqua satellite acquired this natural-color view of a massive bloom of phytoplankton off the coast of Oregon and Washington. Marine phytoplankton require just the right amount of sunlight, dissolved nutrients and moderate water temperatures to make their populations explode into blooms that cover hundreds of square kilometers of the sea.

The floating, plant-like organisms give the water a milky green color in satellite imagery. During the summer in North America’s Pacific Northwest, warming land temperatures create winds that blow offshore and push surface waters away from the coast. This causes cooler, nutrient-rich waters to well up from the depths and provide bloom conditions. The phytoplankton can become a food source for various marine species; however, some species can also deplete the water of oxygen and become toxic to marine life.

“Blooms of this type are common during the summer due to the coastal upwelling process,” said Bill Peterson of NOAA’s Northwest Fisheries Science Center, whose team samples the waters off Oregon every two weeks. “What is uncommon is the ability to see so much of the coast in a single image because fog and low-elevation clouds often obscure large-scale views.”