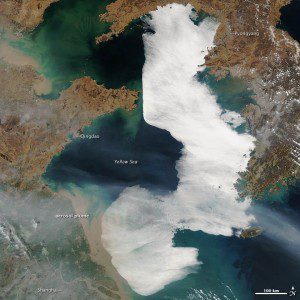 This type of fog generally forms when warm, moist air is pushed by winds over a cooler surface. In this case, northeasterly winds pushed a tongue of warm air out over the cooler Yellow Sea. The water is cooler because sunlight warms it less quickly than the land surfaces surrounding it, and because ocean currents off the west coast of Korea tend to bring cold water to the surface.

The fog is generally thickest along the edges. Closer to the middle, the surface has a more textured appearance, indicating possible convection and the possible presence of stratocumulus clouds. These clouds form higher in the atmosphere than fog and don't affect visibility at the sea surface. An aerosol plume, likely haze emanating from industrial areas in China, is also visible and has caused the lower half of the cloud to appear slightly grayer than the upper half.