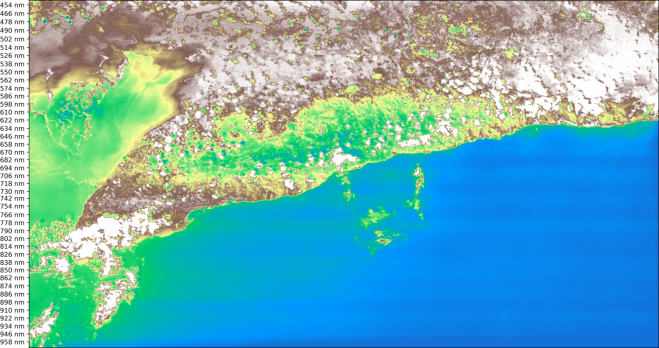 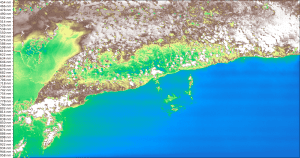 This first-light image of the southern coast of Cuba comes from the miniature HyperScout instrument aboard the European Space Agency (ESA) GomX-4B CubeSat, which was launched with partner nanosatellite GomX-4A in February 2018 as a multi-technology demonstration mission testing inter-satellite radio links and micro-propulsion technologies as well as this hyperspectral imager developed by cosine Research in The Netherlands.

Color equals information, so the more spectral bands an Earth-observing instrument sees, the greater quantity of environmental findings can be returned to its homeworld.

“This is a single image with a footprint of approximately 200 by 150 square kilometers, where each horizontal line shows the scene in a different spectral band, proving the overall functioning chain of the HyperScout works as planned—from acquisition to compression and downlink to the ground,” he added.

HyperScout is a “linear variable filter” instrument, meaning each horizontal line of pixels it observes is seen at a different wavelength from 400-1,000 nanometers, with the onward movement of the satellite allowing the rapid build-up of a complete hyperspectral image.