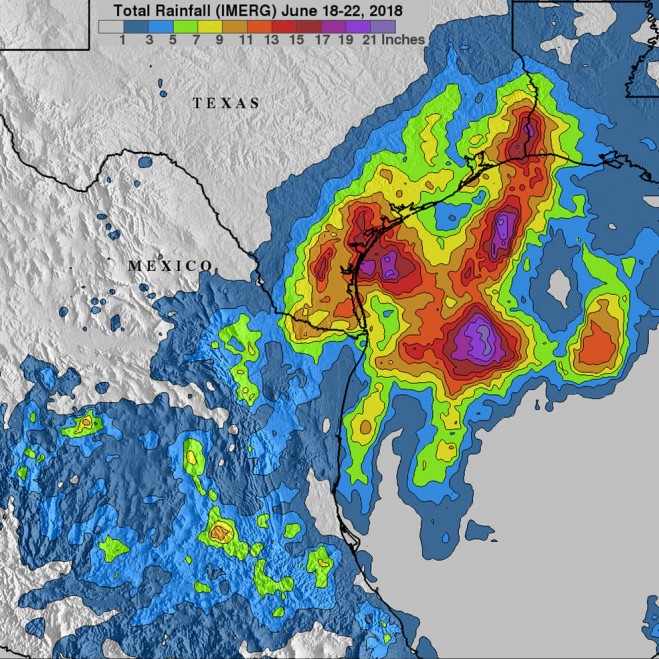 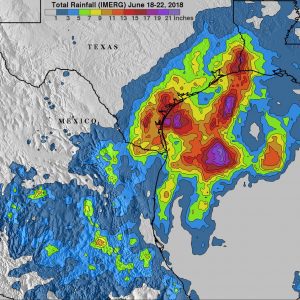 IMERG data show extreme flooding in parts of Texas from low-pressure tropical disturbance. IMERG estimates indicated that the heaviest rainfall occurred in the northwestern Gulf of Mexico, where more than 21 inches (533.4 mm) of rain fell. IMERG data also indicated that more than 9 inches (228.6 mm) fell in large areas from south Texas to western Louisiana. This extreme rainfall resulted in the worst Texas flooding since hurricane Harvey in August 2017. (Credit: NASA)

As Tropical Storm Bud was lashing parts of western Mexico and causing flooding that extended into the American Southwest, a tropical disturbance was spinning over the Gulf of Mexico and straddling southeastern Texas. This system sat in place for almost a week, bringing extremely heavy rainfall and causing a flash-flood emergency. More than 15 inches (381 mm) of rain fell in Hidalgo County, Texas, between June 18-22, 2018.

With streets being overrun by rain waters, the Governor of Texas declared a state of emergency for six counties in south Texas on June 21, two days after rain began. The heaviest rain from the system had ended by June 22, but the weather service was still calling for more “occasional showers” in the area.