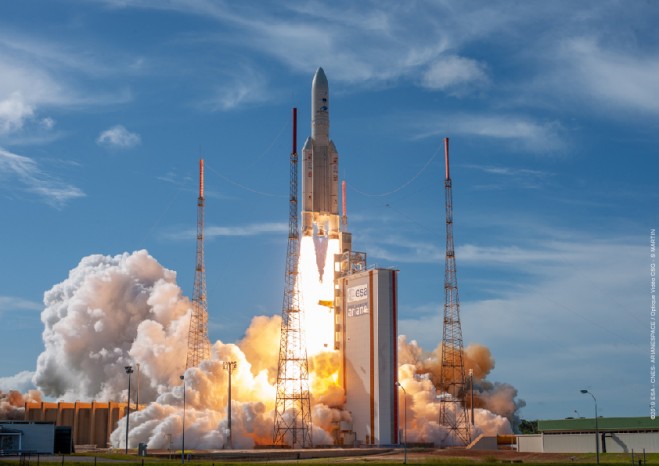 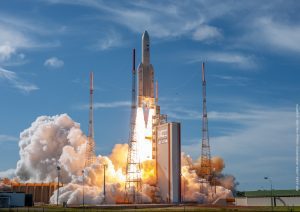 The second satellite to join the constellation that forms the European Data Relay System (EDRS) was successfully launched on Aug. 6, 2019, onboard an Ariane 5 rocket from Europe’s Spaceport in Kourou, French Guiana. EDRS enables people to observe Earth almost live, accelerating responses to emergency situations and spurring the development of new services and products that create jobs and increase prosperity.

EDRS—dubbed the ‘SpaceDataHighway’ by its private operator Airbus—uses innovative laser technology to dramatically cut the time needed for Earth observation satellites to deliver information to the ground. The satellites can transmit data at a rate of up to 1.8 Gbit/s.

The latest satellite, EDRS-C, will operate in geostationary orbit. It will join its sister EDRS-A, which was launched in January 2016.

The geostationary position, higher than typical low-Earth orbiting satellites, will enable the constellation to maintain an almost constant connection with the lower Earth observation satellites that could otherwise only transmit their information when in direct line-of-sight with their ground stations, which introduces delays of up to 90 minutes.

Instead, the EDRS satellites can then beam the information back to Earth in almost real time.

On this launch, Ariane 5 features new slightly elongated upper-stage cryogenic tanks. This has allowed them to carry several hundred kilograms more propellant, bringing a launcher performance gain of about 100 kilogram payload allowance to geostationary orbit, corresponding to an extended burn duration of about 30 seconds.