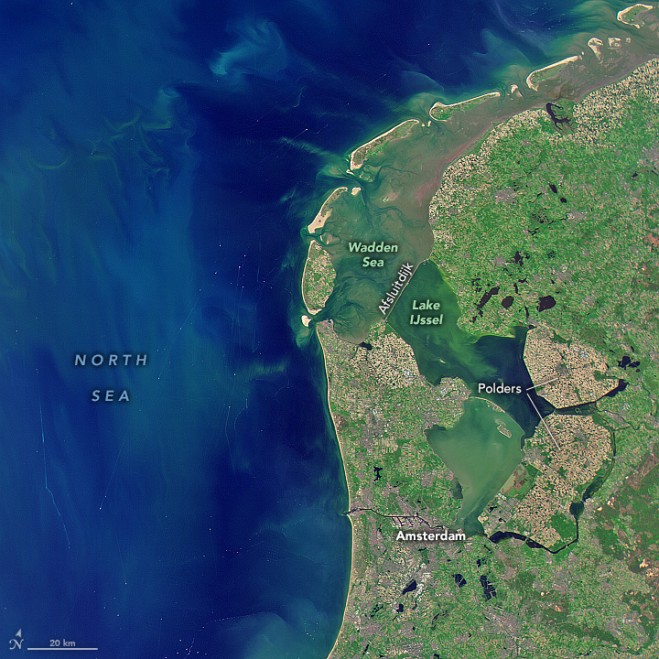 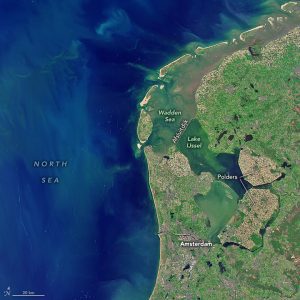 Where the Netherlands meets the North Sea, there’s an impressive confluence of natural and man-made features. Much of the human-made infrastructure is designed to keep rising seas out of the low-lying country. The landscape carved by nature is a hotspot for plants and animals taking advantage of the nutrient-rich wetlands.

The Netherlands has long been shaped by floods and by efforts to hold back the sea. A spine-like archipelago known as the West Frisian Islands protects the mainland of the country. Just to the south lies the world’s largest system of unbroken mud flats, known as the Wadden Sea. Harbor seals, Eurasian spoonbills, and 10,000 other species of flora and fauna depend on these mudflats for migration and feeding.

The Wadden Sea used to be connected to the bay to the south—known as the Zuiderzee—until the construction of the 32-kilometer (20-mile) Afsluitdijk in 1932. Designed to protect the Netherlands from rising seas, the dam also created a freshwater lake known as Lake Ijssel.

Cutting part of the Zuiderzee off from the North Sea allowed the Dutch to reclaim some of the shallow wetlands behind the dam. The Ministry of Infrastructure and Water Management surrounded the wetlands east of Amsterdam with dikes and drained them for agriculture using wind power. The land created from the diking and draining of wetlands is known as a polder. Roughly 1,620 square kilometers (620 square miles) of land has been reclaimed this way. Collectively, this human-made system of dams, dikes and polders is known as the Zuiderzee Works.

The Wadden Sea provides a critical resting and feeding place for millions of birds as they make their yearly migration along the East Atlantic Flyway. Since 2009, the area has been listed as a World Heritage Site by the United Nations Educational, Scientific and Cultural Organization because of its unique ecology and importance to biodiversity.

This image was acquired on June 1, 2021, by the multispectral HawkEye sensor aboard the SeaHawk CubeSat. SeaHawk is a new nanosatellite designed to monitor phytoplankton by measuring the color of the ocean and coastal ecosystems. Phytoplankton are the foundation of food webs in marine ecosystems, and they also play a large role in the global carbon cycle by consuming about 24 percent of the carbon dioxide in the atmosphere.

Previous satellite instruments designed to measure global ocean color, such as the Sea-viewing Wide Field-of-view Sensor (SeaWiFS), had lower spatial resolution and the large pixels made research of marine and coastal environments challenging. SeaHawk was designed to fill this void by providing data with eight times the spatial resolution of SeaWiFS. This small satellite only recently began routine operations but has already proven to be a low-cost way to measure ocean color in coastal ecosystems.