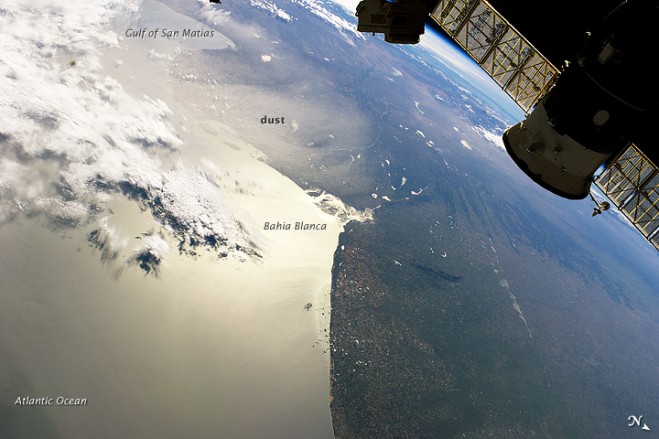 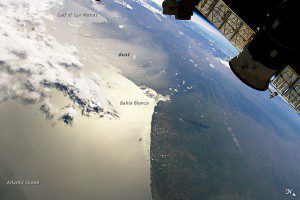 Northwestern and central Argentina are subject to frequent dust storms. A combination of late Pleistocene loess—fine sediments deposited by wind and associated with former glaciers—and dry westerlies blowing down from the Andes Mountains combine to produce sudden and extensive clouds of the fine soil. The strong winds are known locally as the pamper sucio.

This panoramic, oblique view of eastern Argentina and its coastline shows a large plume of dust blowing from the interior to the Atlantic Ocean. This image is centered on Bahia Blanca, which is also highlighted by sun glint—light reflected off the water surface back toward the astronaut-observers on the International Space Station (ISS). The only significant cloud cover is located offshore. A docked Russian Progress spacecraft is visible at image upper right.

The dust event illustrated here spans parts of the province of Rio Negro and southern parts of the provinces of La Pampa and Buenos Aires. The view also includes the coastal terrain between the Gulf of San Matias and Bahia Blanca, which are separated by about 330 kilometers. The area includes the agriculturally productive southern Pampas plain region, where the landscape transitions to the drier, less productive low hills and valleys of northern Patagonia.