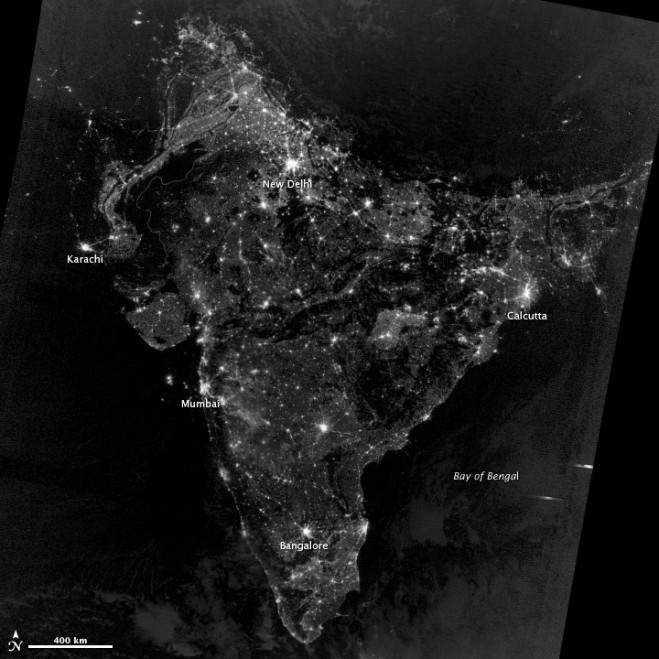 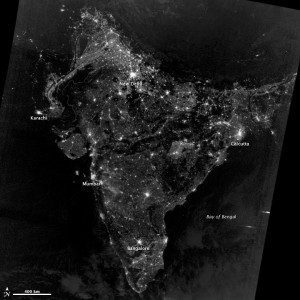 A Suomi-NPP image of India at night during the Diwali festival also shows cities in Bangladesh, Nepal and Pakistan near the edges. Click on image to enlarge.

Each fall, Hindus around the world light lamps, candles and firecrackers for the festival known as Diwali. A colorful satellite image of India that claims to show the region lit for Diwali has been circulating on the Internet in recent years, but it’s not authentic. However, the image at left (top), collected by the Suomi NPP satellite, is the real deal.

The Suomi NPP image, acquired Nov. 12, 2012, is based on data collected by the satellite’s Visible Infrared Imaging Radiometer Suite “day-night band,” which detects light in a range of wavelengths from green to near-infrared. The image has been brightened to make the city lights easier to distinguish. 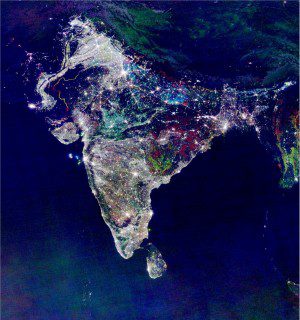 This image, which has been purported to show India’s Diwali festival lighting, actually is based on data from the Operational Linescan System. White areas show city lights that were visible prior to 1992, while blue, green and red shades indicate city lights that became visible in 1992, 1998 and 2003, respectively.

Most of the bright areas are cities and towns in India, the country with the world’s largest Hindu population. India is home to more than 1.2 billion people and has 30 cities with populations more than 1 million. (For comparison, China has 62 cities with more than 1 million residents, and the United States has nine). Cities in Bangladesh, Nepal and Pakistan are also visible near the edges of the image.
In reality, any extra light produced during Diwali is so subtle that it’s likely imperceptible when observed from space. The image that has been portrayed as showing the Diwali lighting actually is based on data from the Operational Linescan System, which is flown on U.S. Defense Meteorological Satellite Program satellites. That image, shown at left (bottom), is a color composite created in 2003 to highlight population growth over time.