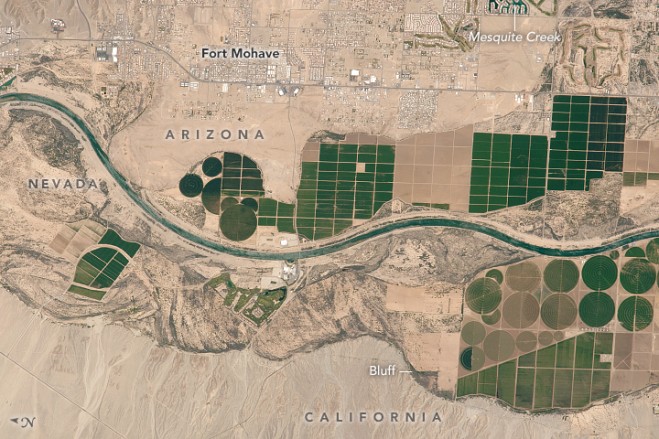 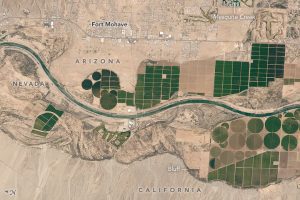 Looking down on the desert vistas of the southwestern United States, an astronaut took this photograph of a short section of the Colorado River. This reach of the river is marked by dark-toned agricultural fields, both rectangular and round, restricted to the narrow zone of arable land on the floodplain close to the river. For scale, the larger crop circles are 750 meters in diameter. Note that from the astronaut’s perspective here, north is to the left.

The towns of Fort Mohave and Mesquite Creek are more difficult to see and occupy slightly higher ground—separated from the floodplain by steep bluffs that appear along the lower margin of the image. This area lies within the Fort Mojave Indian Reservation; it is also where the state boundaries of Arizona, Nevada and California meet. The Mojave people have leased much of the reservation to agribusinesses for cultivation of commodity crops such as alfalfa, corn and soybeans. This has led to an influx of non-native people, such that the Mojave now make up less than half of the population of the reservation.

Photo Credit: This image was taken by a member of the Expedition 51 crew on April 14, 2017, with a Nikon D4 digital camera using an 1150 millimeter lens, and is provided by the ISS Crew Earth Observations Facility and the Earth Science and Remote Sensing Unit, Johnson Space Center.