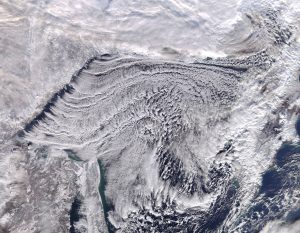 Snow covers the land of Eastern Russia in the west of the image, with a large bank of cloud overlying the land in the northwest. Long parallel rows of cumulus clouds blow off the snow-covered area and over the blue waters of the Sea of Okhotsk. These cloud streets form as cold, dry air from the land blows across relatively warmer, much moister ocean water and creates cylinders of spinning air. Where the air is rising, small clouds form. Where the air is descending, the skies are clear. The cloud streets align along the direction of the wind movement.