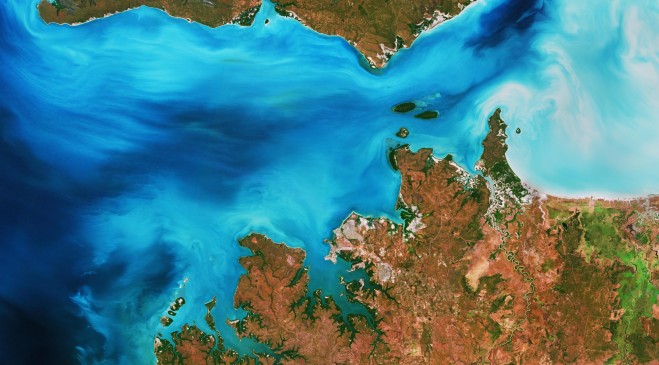 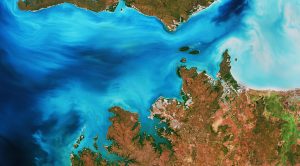 The Copernicus Sentinel-2 mission takes us over Clarence Strait, a narrow body of water in Australia’s Northern Territory. The strait ties the Beagle Gulf in the west with the Van Diemen Gulf to the east and separates Australia’s mainland from Melville Island, part of the Tiwi Islands. The southernmost tip of Melville is visible in the upper part of the image. The three islands in the southern part of the strait are the Vernon Islands, which host navigation aids to assist vessels passing through the strait.
Australia’s Northern Territory is a sparsely populated region. With a population of around 140 000, Darwin is the territory’s capital and largest city, and is visible in gray in the center of the image.
In 1839, the HMS Beagle sailed into the waters of what is now known as Darwin Harbour. The harbour was named after the British evolutionist Charles Darwin, but, contrary to popular belief, Darwin himself never visited the area.
With a strong Aboriginal culture, art and tropical summers, Darwin is a popular tourist destination. The Crocosaurus Cove in the heart of the city houses the world’s largest display of Australian reptiles.
The waters that surround Darwin are riddled with saltwater crocodiles and deadly box jellyfish, which inhabit the waters from October to May. The Adelaide River, known for its high concentration of saltwater crocodiles, can be seen to the right of Darwin, snaking its way northwards, flowing 180 kilometers before emptying into the Timor Sea.
The Djukbinj National Park, visible east of Adelaide River, is a protected area and consists mostly of wetlands. The close vicinity to the water makes the park a major breeding ground for a variety of water birds, including magpie geese, herons and egrets.