Bloom in the Barents Sea 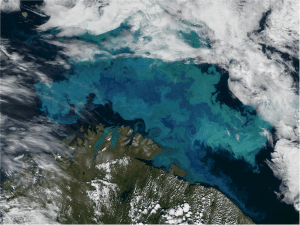 This natural-color image was acquired Aug. 14, 2011, by the Moderate Resolution Imaging Spectroradiometer (MODIS) sensor on NASA's Aqua satellite. Plankton blooms spanning hundreds or even thousands of kilometers occur across the North Atlantic and Arctic Oceans every year. Many species thrive in the cooler ocean waters, which tend to be richer in nutrients and plant life than tropical waters.

In this image, the milky blue color strongly suggests the bloom contains coccolithophores, microscopic plankton that are plated with white calcium carbonate. When viewed through ocean water, a coccolithophore bloom tends to be bright blue. The species is most likely Emiliana huxleyi, whose blooms tend to be triggered by high light levels during the 24-hour sunlight of Arctic summer. The variations in bloom brightness and color in satellite images is partly related to its depth: E. huxleyi can grow abundantly as much as 50 meters below the surface.

Other colors in the scene may come from sediment or other species of phytoplankton, particularly diatoms.

The Barents Sea usually witnesses two major bloom seasons each year, with diatoms peaking in May and June, then giving way to coccolithophores as certain nutrients run out and waters grow warmer and more layered (stratified). The area in this image is located immediately north of the Scandinavian peninsula. The region is a junction where several ocean current systems”including the Norwegian Atlantic, the Persey, and east Spitsbergen currents”merge and form a front known as the North Cape Current. The intersecting waters, plus stiff winds, promote mixing of waters and of nutrients from the deep.

Ice-covered for most of the year, the shallow Barents Sea reaches its warmest surface temperatures (6.6 C) in August, when ice cover is at a minimum and the water is freshest (less saline due to ice melt and river runoff) and most nutrient-depleted. Those conditions, researchers have found, are perfect for coccolithophores to take over from other species and dominate the surface waters.