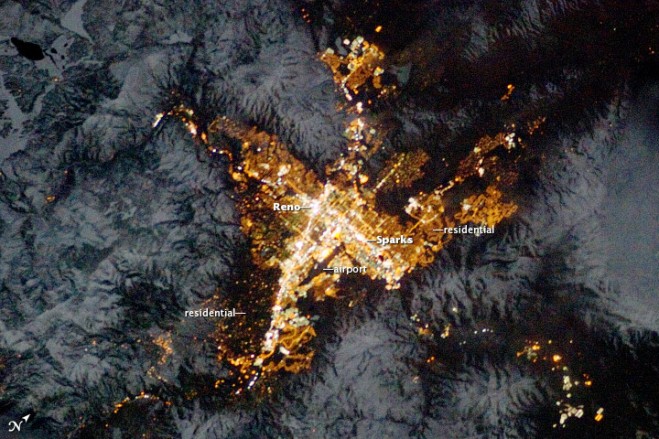 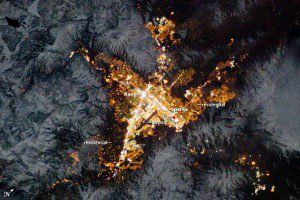 Resembling a giant star with one of its five arms missing, this nighttime astronaut photograph of Reno, Nev., stands out in stark contrast from the surrounding Sierra Nevada foothills.

Reno is located in Truckee Meadows, along the eastern foothills of the Sierra Nevada near the California border. It forms part of the Reno-Sparks metropolitan area—the largest such area in northern Nevada and the second largest in the state after Las Vegas. Lake Tahoe, a major destination for skiing and other outdoor recreational activities, is located less than 50 kilometers (30 miles) to the southwest of Reno-Sparks.

The relatively isolated nature of the city within the surrounding terrain is highlighted in this nighttime image taken from the International Space Station. The major industrial and commercial areas of Reno and Sparks are brightly lit at image center. The major street grid is visible as orange linear features adjacent to the industrial/commercial areas. Residential areas appear dark in contrast. The Reno-Tahoe International Airport is visible as a dark, dagger-shaped region in the southeast quarter of the metropolitan area.