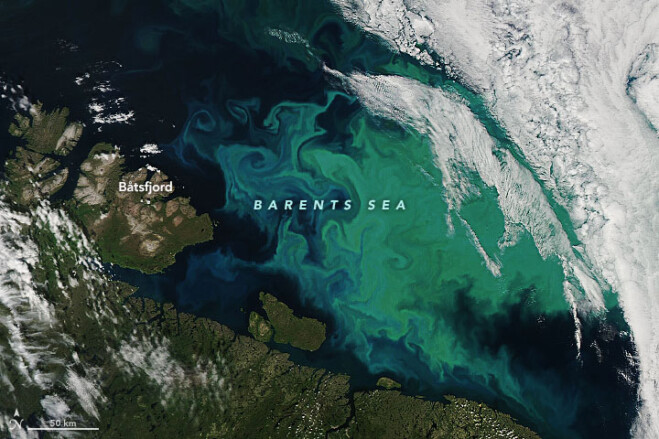 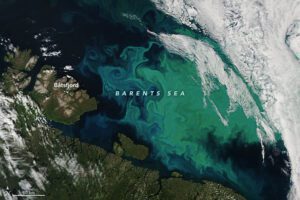 During the spring and summer in the Barents Sea, north of Norway and Russia, phytoplankton show up in abundance. Clouds permitting, the showy displays of these blue and green “blooms” are visible in satellite images just about every year. Yet no two phytoplankton blooms are exactly alike.

From spring into early summer, the surface waters of the Barents Sea are well-mixed, and nutrients are plentiful. This is when blooms of diatoms tend to dominate. These microscopic phytoplankton, with their silica shells and ample chlorophyll, color the surface waters green.

However, the bloom in this image appears green and turquoise blue. The image, centered on the Barents Sea north of the Kola Peninsula, was acquired on July 15, 2021, with the Moderate Resolution Imaging Spectroradiometer (MODIS) on NASA’s Aqua satellite.

There are a few possible reasons for the combination of colors. While it is impossible to verify the species without a direct water sample, this image might be showing the region during a period of transition, as coccolithophores replace diatoms.

“It is possible this is a mixed bloom,” said Andrew Orkney, a doctoral candidate at University of Oxford who has used remote sensing to study phytoplankton in the Barents. “Mixed blooms of coccolithophores and another important bloom-forming group, the diatoms, have been observed off the Norwegian coast in previous years.”

Alternatively, Orkney notes that the color could result from a coccolithophore bloom occurring in waters rich in colored dissolved organic matter (CDOM). CDOM can make typically blue seawater appear anywhere from green to yellow-green to brown depending on the concentration.

Coccolithophore blooms now occupy more space in the Barents Sea compared to a few decades ago, according to recent research. Between 1998 and 2016, the summer blooms have expanded poleward and their surface area in the Barents Sea has doubled.